Climate change and global warming are global issues and it globally affects, and to cause severe damages, to every country on this planet earth. and The Mekong Delta is no exceptional. We are facing them every year, some groups of people suffer mother than others, we just haven’t noticed it yet – some may have but most haven’t or not even care.
Let’s visit Chau Doc City – An Giang province which is my favorite destination. Unlike any parts of the Mekong Delta or anywhere else in Vietnam, where local people really scare of flooding seasons, the fishermen in Chau Doc surprisingly expect flood coming to their town yearly because during flooding seasons, water will flow from upper Mekong down to Cambodia and then go through the Mekong Delta in Vietnam. The flowing water contains very useful sediment and carry tons of fish into this province.
But how did they overcome and benefit from that situation?
To overcame they must change the way they used to live. They Built stilt houses in their own properties. And to adapt and benefit from it, they invested heavily on boats, various fishing tools to catch various kind of fish. It was very photogenic during flooding seasons and if you visited this region during flooding seasons before, you would see fishermen were busy on their boats cathing fish . They did great turning a bad situation into a benefitial one. When supply oustripped demand, once again, they learned to store their goods for long time by making fermented fish which is a very popular ingredient in Cambodian cuisine – We will discuss about this later in other posts though.
Why i took you that far and how climate change and global warming have affected it?
It’s been no flood coming to Chau Doc for the past 2 years, and droughts last longer causing water shortages – and lack of water can imperil rice crops. Fishermen can not fish, farmers have to let they land lie fallow. so it seems everybody has been affected, some may suffer more than others, but they may not notice it yet.
I always joke with my fellow photographers and friends if they want to see the Mekong Delta, they must be hurry because its rapidly change in a bad way. As a photographic destination in the Mekong Delta, we can not see beautiful fishing activities in this region anymore. My prediction is that you will never see that again as temperature is going to rise each year that makes it hotter and hotter every year. inadequate rainfall and long lasting droughts will be expected next year.
#chaudoc #mekongdelta #vietnam #sunrise #rice #ricefields #palmtrees #climatechange #globalwarming #watershortage #fields #photography #photographicdestinaion 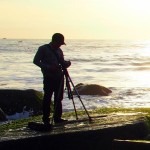